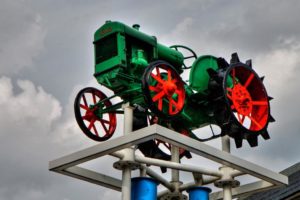 The predecessor of CHARVÁT CTS a.s. was the Strojní a traktorová stanice Okřínek (Machine and Tractor Station Okřínek), established in 1949. It served as a technical base for repairs of agricultural machinery.

The way towards the main sector of current production – container transport systems – began in the mid-1980’s. In the first half of the 1980’s container transport was already used in the former Czechoslovakia. The new generation of container carriers was already an independent project of STS Okřínek, from the initial idea all the way to its implementation.

In 2013 the owner of CTS-servis, a.s. was changed. CHARVÁT Group s.r.o. became the new owner. At the same time the company name was changed to CHARVÁT CTS a.s.

The project "Innovation of tractor trailers in Charvát CTS/Extension of the welding shop and structural modifications to the existing building" is co-financed by the European Union.